This author has not yet filled in any details.
So far Ireen APPLYitYourself has created 4 blog entries.

How to. Removing film/vinyl with adhesive.

Our window films can always be easily removed without damaging the glass.

When removing film or vinyl with a removable or permanent adhesive, you want to do it in full direct sunlight (during application you do NOT what direct sunlight). So the film/adhesive is as warm as possible, due to the fact of being pre-heated by the sun.

In addition, you should use an infrared-heater/heat-gun to further increase the temperature of the film (mainly important for films with a permanent adhesive). Always gently heat the film, while moving the heat source around in a circular motion, do not keep the heat source pointed on a single spot for any length of time.

If warm enough the film should be easy to remove, while leaving little to no adhesive behind. If adhesive is left behind during removal of a permanent adhesive film, the film is likely not warm/hot enough. Increase the temperature of the vinyl/film during removal.

On a glass/hard surface, you can also cut the film in strips of 300 mm in width, to make the removal easier.

Static window cling does not have an adhesive, so removal should be a 1 second job. No tools are required.

Frosted Window Film for your Doors

Below you will find a number of examples of frosted window films for your front door at home. You can design and apply your own personalized window film for every door in the house.

Frosted window film can be applied to doors in the living room, bathroom, kitchen, nursery and/or children’s bedrooms. Also to French door and shower doors.

Frosted window film can be applied to doors in your office, business, shop and/or restaurant. Both on the inside and outside. Made to measure (cut to size and cut to shape) making it easy to apply the window film yourself to the door.

Frosted window film for your doors 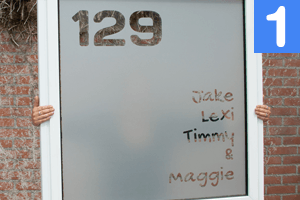 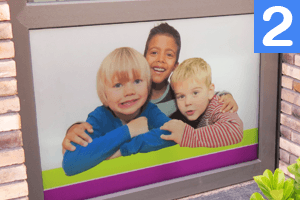 Frosted Window Film (Printed) (2). Design it yourself just like you want it. Enter the dimensions and you will directly see the price. Upload your own images and designs and/or use our online texts and designs. Everything is possible. Printed frosted window films provide you with privacy, colourful images and light. Start designing your own unique frosted window film with print here. 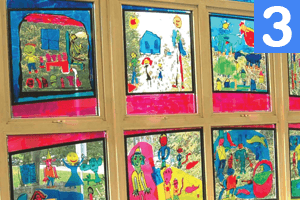 Design your own unique window films with our online design software. Easy, Simple and Quick. Upload your own designs quick and easy.